"Human Etch A Sketch" Rik Zortman honors memory of BVU’s Canyon Hopkins while jogging through the streets of Storm Lake mapping out the phrase "MooseStrong."

An Iowa runner known as the “Human Etch A Sketch” visited Storm Lake on Saturday and ran five miles through the streets to map a phrase in memory of Buena Vista University graduate Canyon “Moose” Hopkins.

Hopkins, who graduated in 2019, died on Oct. 24, following a 14-month battle against Stage 4 Synovial Soft Tissue Sarcoma. Hopkins, of Earlham, was a starting basketball player for the Beavers and a popular student on campus, one whose smile, strength, and spirit rallied thousands of people across Iowa under the social media hashtag “MooseStrong.” 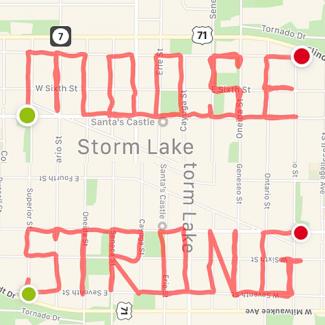 And that’s what Rik Zortman mapped out as he ran through Storm Lake’s city streets Saturday afternoon. Joined by BVU graduate and Storm Lake St. Mary’s Principal Ryan Berg, the Coralville resident ran up and down city blocks to physically map the phrase “MooseStrong.”

“I began running to honor and pay tribute to cancer victims in 2017,” Zortman says. “My run for Canyon Hopkins on Saturday represents the 95th Iowa county in which I’ve run to honor someone.”

All told, Zortman has honored more than 1,050 people in this unique way. He took up running as a hobby in 2009 to help relieve stress and grief he experienced after the death of his son, Armstrong, who fought the ravages of a brain tumor for five months until his death. He was only 3 years old.

“Armstrong was a very active little boy, he loved to run around,” Zortman says. “And in picking up running, it was a way I could remember him.” 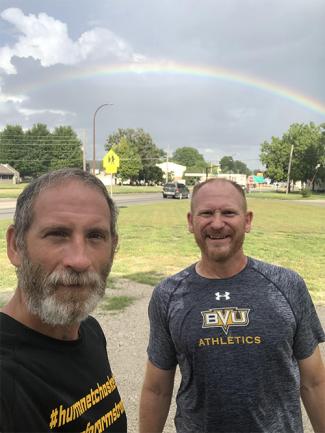 Zortman, an assistant receiving manager at Menards in Iowa City, was the subject of an ESPN feature story in 2018. His “Human Etch A Sketch” running efforts have been featured by reporters across Iowa and beyond in the past three years.

Zortman “mapped” a name during a run in Marcus on Saturday afternoon before heading to Storm Lake for his “MooseStrong” effort. A light mist cooled Zortman and Berg as they jogged from West Fifth and Otsego streets north to West Seventh Street and eventually to Lake Avenue and past the Buena Vista County Courthouse. A rainbow appeared just as the pair finished their memory run.

“You can’t make this up,” Zortman said as the rainbow stretched across the Storm Lake horizon. “As soon as we were done, we saw a rainbow.”