In his inaugural address, President Brian Lenzmeier honored the work of past stakeholders while positioning the University for a bright future.

Buena Vista University celebrated the inauguration of President Brian Lenzmeier in a ceremony on Friday at Schaller Memorial Chapel.

“I want to mention how humbling it is to stand here right now,” Lenzmeier said. “I love BVU. I love the people with whom I work. I love seeing what our students do while they are with us, and what they accomplish after they graduate. I want more than anything to see BVU and its stakeholders thrive.”

BVU Board of Trustees Chair Michael K. Pierce conducted the installation observance that featured Lenzmeier’s wife, Betsy, placing the BVU President’s medallion around the President’s neck as their sons, Owen and Matthew, looked on.

Pierce referred to Lenzmeier as “exceptionally qualified” and “uniquely positioned” to lead BVU. 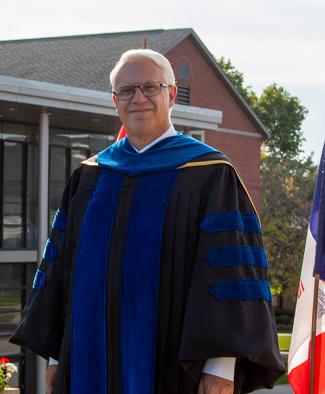 Lenzmeier, a native of Willmar, Minn., came to BVU in 2003 as a Professor of Biology, after having earned a Ph.D. in biochemistry from Colorado State University and completed post-doctoral research in molecular biology at Princeton University. The graduate of Saint John’s University in Collegeville, Minn., would later serve as a visiting research fellow in molecular medicine at the Mayo Clinic.

“The attributes that make Brian an extraordinary scientist and teacher also make him an exceptional leader,” said BVU Board of Trustees Vice Chair Becki Drahota, who lauded Lenzmeier’s curiosity, authenticity, and agility to navigate turbulence associated with the past 19 months of a pandemic.

Lenzmeier, a two-time BVU Faculty Member of the Year and the 2009 George Wythe Laureate for excellence in teaching, is one of few college presidents today whose background is in virology.

Under his guidance, BVU has realized enrollment gains, growing in each of the past three years, rising from an enrollment of 1,815 in 2019 to 1,959 students to start the 2021-22 academic year, an increase of eight percent. U.S. News & World Report’s prestigious Best Value Schools Among Regional Universities in the Midwest rated BVU sixth among 71 institutions this year, some 21 spots ahead of any other Iowa institution.

“The attributes that make Brian an extraordinary scientist and teacher also make him an exceptional leader.”

“Any success enjoyed by BVU is shared,” Lenzmeier repeated, while describing ongoing efforts of faculty and staff members, the Board of Trustees, BVU’s friends and benefactors, community members, a growing body of BVU alumni, and the students themselves, many of whom turned out to hear his remarks. He also saluted those closest to him, namely Betsy and their sons, his parents, both of whom were educators, and his brother, Paul.

The BVU President joined Gary Steinke, President of the Iowa Association of Independent Colleges and Universities, in thanking Iowa Gov. Kim Reynolds for her support in strengthening rural Iowa.

Reynolds noted how BVU initiatives in The Foundry and the Lamberti Center for Rural Entrepreneurship meld work, economic development, and community connections across generations in fascinating ways. “I cannot imagine a better fit for Buena Vista University,” Reynolds said. “As Dr. Lenzmeier knows, BVU has established itself as an unquestioned academic leader.”

Lenzmeier recalled seminal points in BVU’s past while charting a course forward, citing, for example, the record $18-million philanthropic gift provided by Dr. Harold Walter Siebens in 1980 as one that changed the course of BVU history.

Another pair of examples illustrated ways in which BVU must maintain its ability to adapt in the future. Forty-six years ago, he said, then-President Keith G. Briscoe and his team had the foresight to open BVU’s first “center” away from Storm Lake. The partnership with Iowa Central Community College in Fort Dodge expanded to include more than one dozen sites in cities across Iowa, where tens of thousands of place-bound adults could earn their associate’s degree and bachelor’s degree without leaving their community.

The second success involved then-President Fred Moore and his leadership team that in 2000, established BVU as the nation’s first wireless laptop campus. The decision continues to pay dividends nearly two decades later as faculty members seamlessly transitioned to online course delivery at the onset and throughout the COVID-19 pandemic.

“We are celebrating today because BVU evolved 21 and 46 years ago,” Lenzmeier said.

Lenzmeier described three priorities—quality outcomes and experiences, financial strength, and continuous improvement and innovation—as ways in which BVU faculty, staff, students, friends, alumni, Trustees, and more will transform the University throughout the next few years, decades, and beyond.

“We must continue to support and expand the efforts in our Center for Diversity and Inclusion,” said Lenzmeier, noting how a culture of continuous improvement and innovation would drive successes. “We must continue to work with Storm Lake, Buena Vista County, and the State of Iowa to be a leader in rural education. With the help of the Lamberti Center for Rural Entrepreneurship, we will transform our communities into bustling economic centers that thrive because of BVU and its diversity of thought and people.”